Parking spaces could be better used

“WePark shows that in cities like San Francisco, coworking is unaffordable to many, and the sheer volume of free space allocated to parked cars could be put to much better use.”

But not housing — so far. Read the full article here.

“California finally is beginning to consider solutions to its housing crisis that are on the same scale as the problem. …

“Precisely because [SB50] rewrites the rules for so much California land, it is likely to facilitate development at a wide range of price points. But even if the new construction is disproportionately upscale, it could serve to reduce development pressures on communities outside the rezoned areas.

“It is not, to be sure, a silver bullet. Even if the state can reduce rents and home prices by greatly increasing the amount of new housing, California still needs to find the means and will to subsidize housing for those who cannot afford market-rate units. But it would be a mistake to preserve some affordable housing by preventing the construction of more affordable housing.

“It is time to rewrite the rules: The solution to California’s housing crisis is more housing.”

Read the full article here. If you hit a paywall, go here.

SB 50 will be amended to do all of the below. SB 4 will be held in committee.

In counties 600,000 population or less, modify equitable communities incentive to:

In 2018, we were the proud recipients of APA’s 2018 National Planning Achievement Award for a Grassroots Initiative — Gold for our Street Air Project, and its associated award-winning film Columbus Discovers Air Pollution.

Our research found that if cities chose to make simple design changes to pedestrian areas (or as we say, to the street-edge), the area’s outdoor eating experience could be notably safer as well as more enjoyable.

Having garnered significant results from our research as well as success from our Street Air group, we intend to continue working with the city [of San Francisco] throughout the Columbus Avenue redesign and plan to help other cities who reach out to us, seeking design suggestions for their new projects.

Our recently completed film, “Airgregates, the Impact of Concrete Mixing Facilities on the Bay View Community,” has been selected as a finalist in the upcoming Clear the Air Film Fest sponsored by Breathe CA and the Bay Area Air Quality Management District.

Street Air is expanding by bringing on more students with ideas for projects they’d like to pursue. PM 1 monitors have been recently donated by local North Beach families and we have started some of the first street-edge PM 1 measurements in California. 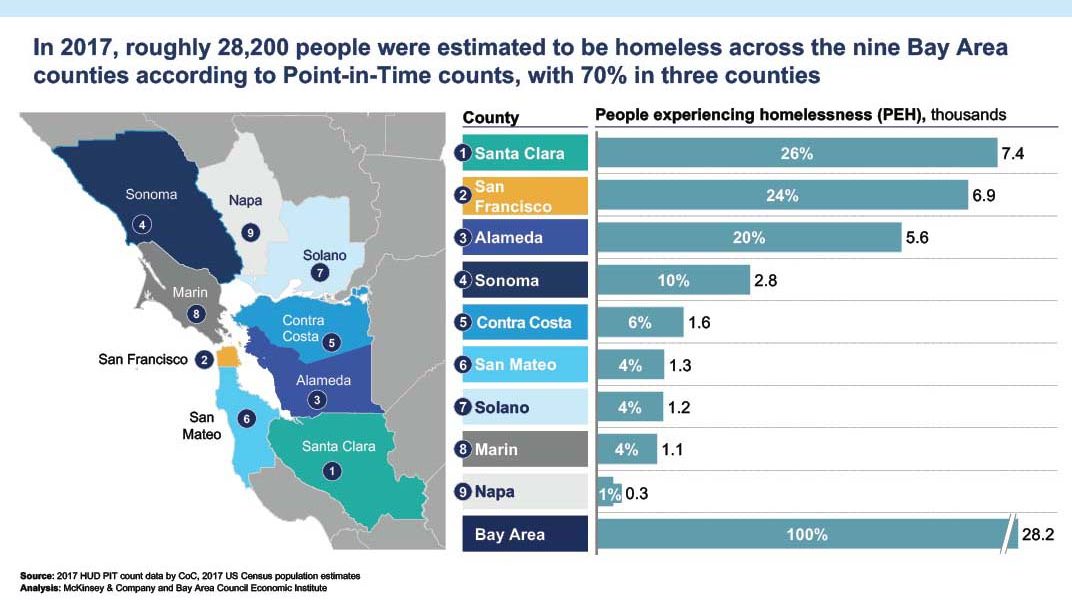 “At the end of each year, the Bay Area Council surveys its members to determine which public policy areas are of the greatest concern to the region’s largest employers. In the Council’s 2017 survey, ending chronic homelessness emerged as a top public policy priority for the first time.

“This study, undertaken in cooperation with global consulting firm McKinsey & Company, aims to provide policymakers with new data and perspectives on how to solve what has become the defining moral challenge facing both the Bay Area region and California. 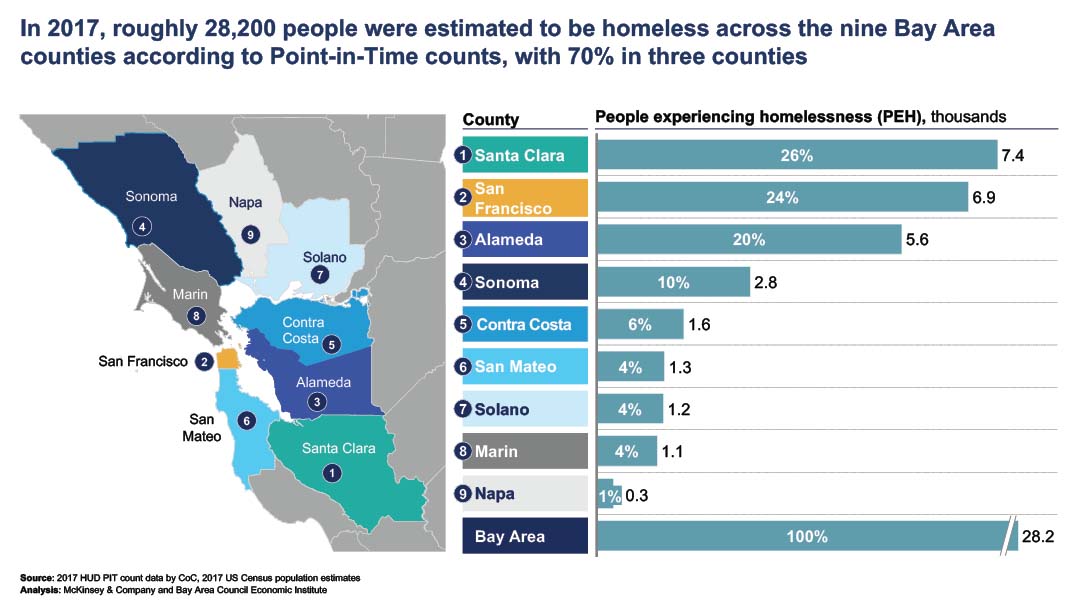 “Until very recently, homelessness was considered the problem of individual cities and counties. For a metropolitan region like the Bay Area, which is divided into nine counties and 101 cities, this approach fails to meet the needs of an intra-regionally mobile homeless population. 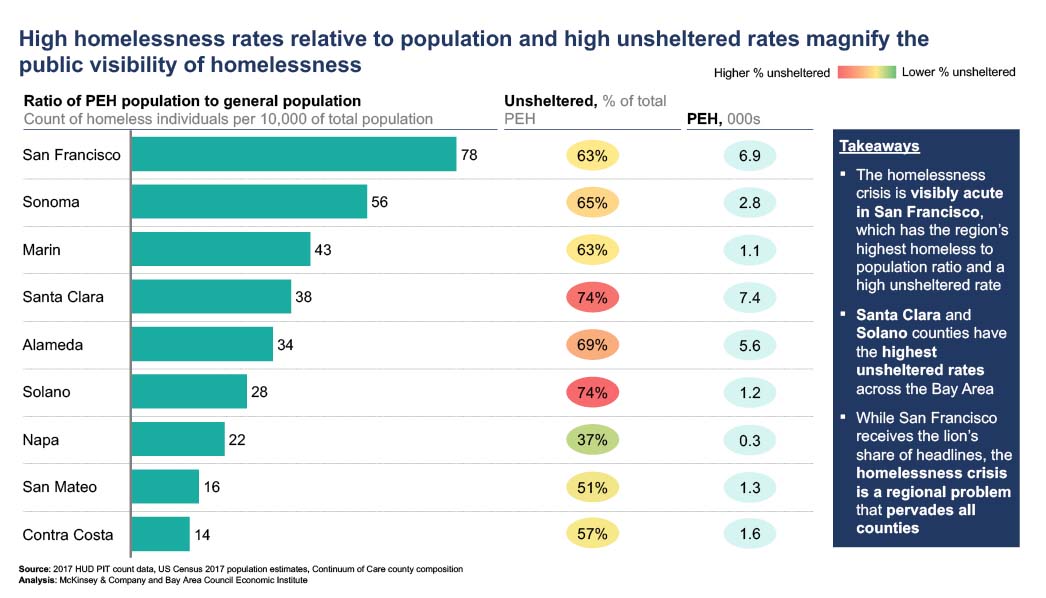 “In this report, a regional lens provides a new perspective on the homelessness crisis and offers new ways to address the problem. 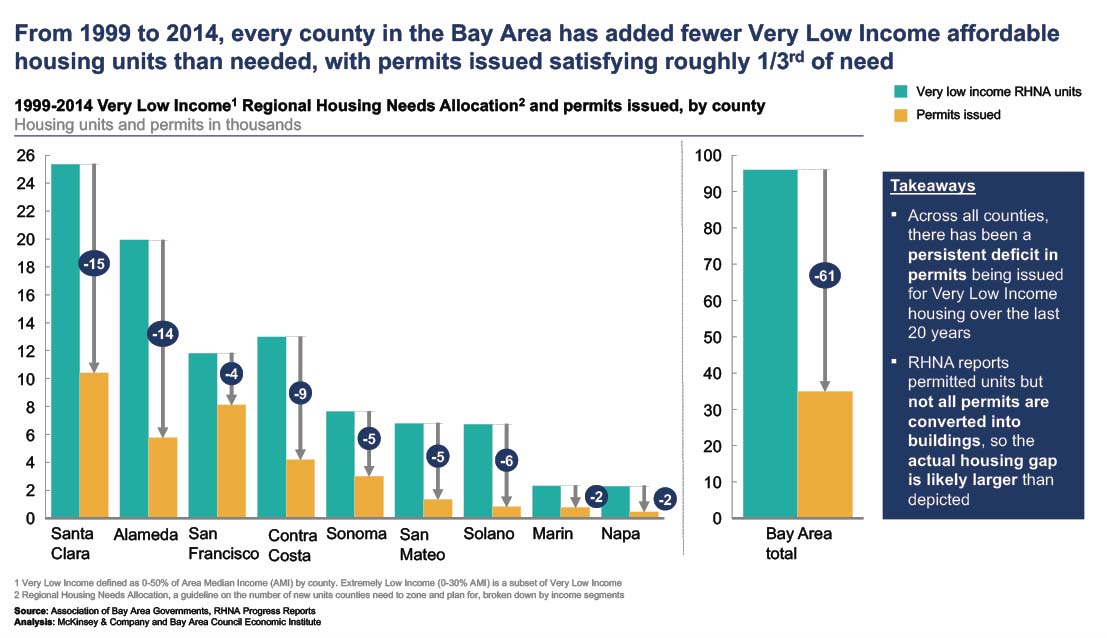 “California’s relatively recent industrial development and rapid and sustained population growth over the 20th century have deprived it of inheriting large stocks of abandoned workforce housing that older cities in the Midwest and East Coast have transformed into shelters and extremely low-income housing. Cities on the West Coast, including in the Bay Area, have no such redundant housing at their disposal.” 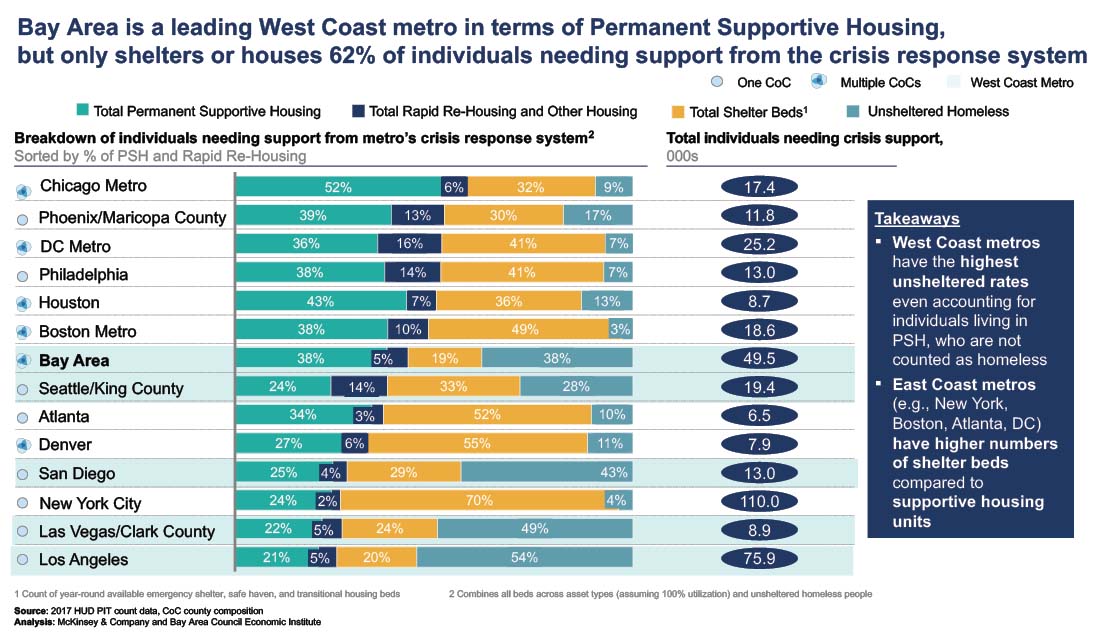 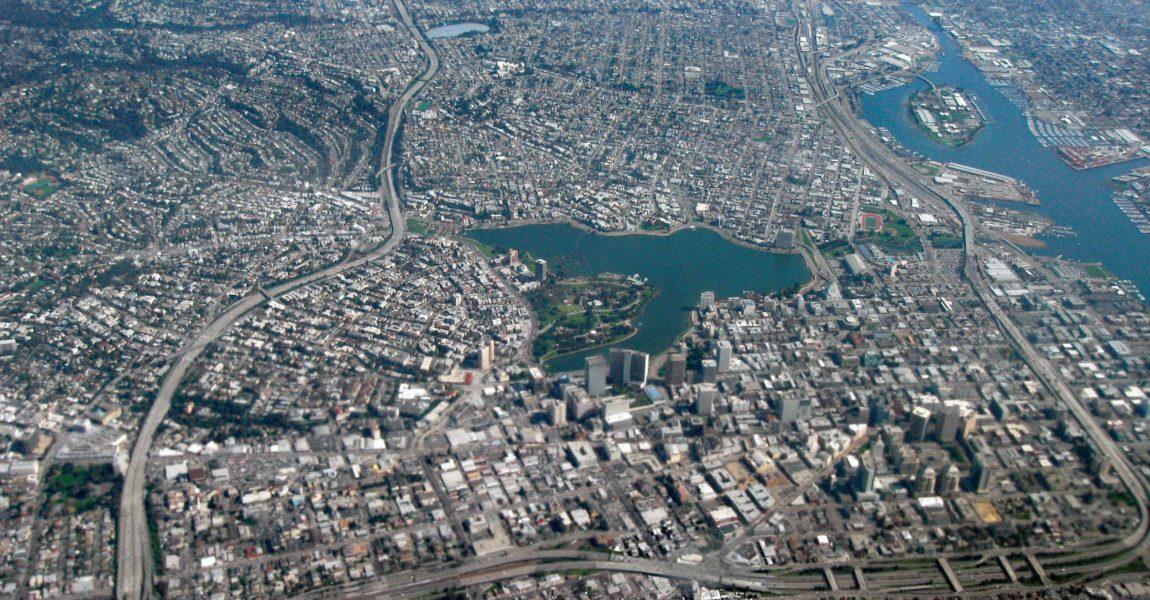 Aerial view of Oakland, California, looking east-southeast. Interstate 580 is on the left, I-980 is at the bottom, and I-880 is at the right. Photo: Dcoetzee, http://bit.ly/2VdKplj

“A highway runs through it”

“Inside the push to tear down an Oakland freeway”

“ ‘Matt Nichols, Oakland’s transportation director, gazed down at I-980, which runs between downtown Oakland and the historically black neighborhood of West Oakland.

“Five lanes of traffic howled below at 70 miles per hour. Throughout the 1970s, Nichols’ predecessors had argued that Oakland needed to build this freeway to thrive. But when Nichols looks at it, he sees desolation.

“Oakland mayor Libby Schaaf thinks I-980 ‘remains a scar on our urban fabric. In its place we want livable infrastructure that creates local economic opportunity, reconnects neighborhoods, and connects the region.’ So the city government has made the freeway’s removal a part of its plan for a growing downtown Oakland.

“Nichols, Oakland’s now-former transportation director (he retired earlier this year), told me [the freeway] was flawed from the start. First planned as a ‘racist moat-building exercise,’ then as a connection to a never-constructed bridge to San Francisco, and finally as a driveway to a shopping center that also was never built, it now carries less traffic than some of Oakland’s surface streets. To him, its existence seems ludicrous. ‘Why, why did anyone build that?’ he said.

“What, realistically, will happen to I-980? ConnectOakland.org, a small organization dedicated to envisioning a neighborhood free of I-980, provided a vision. Mayor Schaaf provided the official sanction for ripping it out. Next, Oakland will need engineers to figure out what different options would cost, and facilitators to organize more conversations with residents about the best use of this land. Oakland’s city government won’t do that itself, Nichols said: The staff is stretched thin just trying to pave pothole-ridden streets. But he thinks MTC has the bandwidth to move the project forward.

“The I-980 teardown could become part of a regional push to relieve traffic congestion by building a second subway tunnel to San Francisco beneath the bay. The underwater tube trains currently traverse is like a two-lane road — with one lane seemingly always being repaired. The trains are crowded with passengers, and the bridges are even more crowded with cars. The system, according to [an MTC] study, is ‘bursting at the seams,’ and almost certainly requires another crossing.”

This is an excerpt. Read the full article here (3500 words).

As a result of Governor Newsom’s efforts to address the state’s housing affordability crisis, the California Department of Housing and Community Development is seeing significant progress from cities not in compliance with state housing law.

In February, Governor Newsom met with California mayors from cities not compliant with Housing Element law. Since then, three cities have come into compliance and 14 others have either submitted drafts or committed to specific actions toward compliance.

“Strong local planning is key to building a California for All, and progress thus far is encouraging,” said HCD Director Ben Metcalf. “We are seeing meaningful efforts by cities and counties that weren’t in compliance to get back on track and plan to meet the housing needs in their communities.”

Of the 47 cities that did not have a state-approved housing plan as of the Governor’s State of the State address, three — Orange Cove, Clovis and Soledad — are now in compliance, and Fillmore has submitted its adopted plan for final compliance review.

An additional 14 jurisdictions — including Lake County, Marina, and San Juan Bautista — are demonstrating progress by submitting drafts or committing to specific actions toward compliance.

SF is world’s most expensive city in which to build, study says

“The City by the Bay has dethroned the Big Apple as the world’s priciest place for new construction.

“This year, San Francisco removes New York from the top spot, having increased by 5 percent in the last year, according to a new report by consulting company Turner & Townsend.

[According to Roland Li, writing in the San Francisco Chronicle, “A long-standing problem is the lack of construction workers, with many veterans leaving the industry after the 2008 recession. High housing costs also have caused some workers to move out of the area, and many commute for hours to reach job sites.”]

“Overall, the survey highlights the massive worldwide disparity between labor costs worldwide — China, India, and Africa had the lowest costs, while North America has the highest costs.

“The five highest cost cities in which to build are San Francisco, New York, London, Zurich and Hong Kong.” 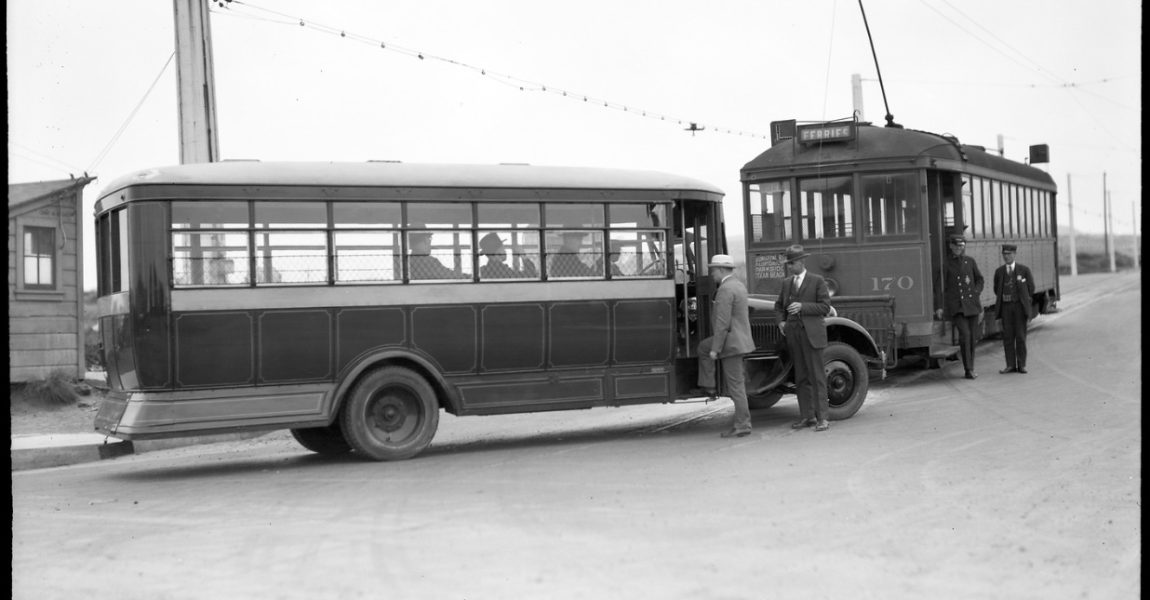 Streetcar spurred development of an SF neighborhood 100 years ago

“One century ago, San Francisco’s West Side resembled photos of the Sahara desert: Sand dunes stretched far into the horizon.

“Then came Muni’s L-Taraval line, and everything changed.

“Today the Sunset District and Parkside neighborhoods are home to roughly 70,000 people, according to city data. The seed of that development is one little streetcar route that connected downtown to the dunes, said Rick Laubscher, president of the Market Street Railway nonprofit and museum.

“ ‘It really did build out the Parkside and Sunset,’ Laubscher said. ‘None of this would exist without the streetcars.’

“On Friday, April 12, the San Francisco Municipal Transportation Agency celebrated the centennial of the L-Taraval. That’s 100 birthday candles for the route that now runs from the Embarcadero to the San Francisco Zoo. Now trains called ‘light rail vehicles’ run along the line where their precursors, streetcars, used to roam.

“ ‘What made the L special,’ Laubscher said, ‘was that The City as a matter of policy wanted to use investment in transit to develop what was an open part of San Francisco.’ [It first operated] ‘as a shuttle.’ It wasn’t until October 15, 1923, that the line began running all the way ‘to the ferries,’ Laubchscer said.”

This is an excerpt. Read the full article here.