City Center is the product of an “urban renewal” effort initially launched in the 1950s.  The original plan was to raze 70 blocks of aging Victorian and Italianate style buildings with modern office towers. Objections from residents and property owners led to a much more modest redevelopment plan in 1966, focused on a 12-block area between Broadway, Jefferson, 10th and 14th Streets.  The first office building opened at 14th Street and Broadway in 1973, followed by the Clorox Building in 1976.  Construction of the complex stalled during the late 1970s and 1980s, and was eventually scaled back to include fewer retail shops, partial restoration of the street grid, and condominiums instead of offices on some of the blocks.

City Center includes the distinctive “twin towers” of the Oakland Federal Building, the Marriott Hotel and Oakland Convention Center, and much of Downtown’s Class A office space.  A pedestrian arcade and civic plaza extends through City Center between Broadway and Clay Street.  The plaza features lunchtime concerts and is a popular gathering place for Downtown office workers, with restaurants and shops, public art, outdoor seating areas, and an entrance to the 12th Street BART Station.

Across 14th Street is Oakland City Hall and Frank Ogawa Plaza. City Hall is a landmark Beaux-Arts style building.  When it was constructed in 1914, it was the tallest building west of the Mississippi River.  The building was extensively retrofitted after the 1989 earthquake, with rubber bearings added to enable the building to move laterally up to 20 inches during an earthquake.  The Oakland City Council still meets in the ornate Council Chamber at the top of the grand staircases in the main lobby.

The park and plaza in front of City Hall is named for former Councilmember Frank Ogawa, a civil rights leader and the first Japanese American to serve on the City Council (1966-1994).  The plaza was the site of the Occupy Oakland encampment in 2011 and the flashpoint for the riots that followed removal of the camp in 2012.  Be sure and step inside the “Rotunda” building on the east side of the plaza.  Once home to Oakland’s largest department store, it is now an office complex featuring a massive central atrium and domed ceiling.

The area east of Broadway and north of Chinatown includes a number of Oakland’s distinctive skyscrapers, including the iconic Tribune Tower.  This area features a grid of wide north-south streets (Franklin, Webster, and Harrison) and narrow numbered east-west streets, in some cases lined with shops and restaurants. The block of 17th Street between Franklin and Webster is particularly charming, and is the center of an area popularly known as “Oaksterdam”, for its concentration of medical marijuana dispensaries.  East of Harrison Street, a high-density residential neighborhood (the Lakeside Apartment District) extends to the shores of Lake Merritt.

How to get to City Center: 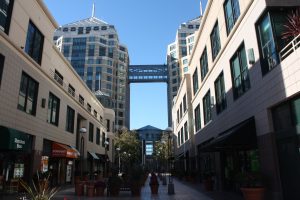 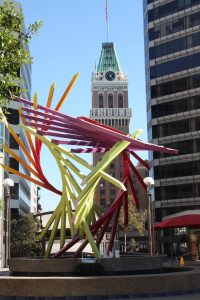 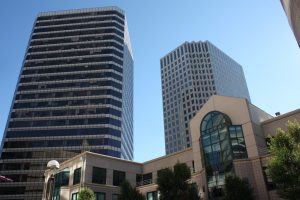