Oakland Chinatown is just a few blocks away from Downtown Oakland and encompasses an area roughly between the 12th Street City Center and Lake Merritt BART Stations. Its boundaries are generally 12th Street to the north, Oak Street and Laney College to the east, I-880 to the south, and Broadway to the west. Although it is less dense than its San Francisco counterpart, Oakland Chinatown has a lot to offer with eclectic storefronts and numerous restaurants that reflect the diversity of the Bay Area’s Asian populations, from Chinese dim sum and Vietnamese beef noodle soup and authentic Cambodian specialties. It is not just a commercial district that caters to the tourist clientele or business professionals looking for delicious food options; Oakland Chinatown is home to residents who live, work, and shop entirely in this neighborhood.

When you are in Oakland Chinatown, watch your step as you are walking along the crowded open air markets as seniors pick out fresh produce. Transportation aficionados should check out this symbol of public safety, a pedestrian traffic signal scramble at 8th Street and Webster Street. A pedestrian fatality in 2002 galvanized the community to invest in a highly visible red and yellow crosswalk with Asian design motifs to alert motorists of this pedestrian zone. Only pedestrians can cross the intersection during the pedestrian phase of 23 seconds.

Despite the diversity in a bustling commercial center, Oakland Chinatown is also facing development pressures due to its proximity to not one, but two BART stations. For many years, urban planners and community members have worked on the Lake Merritt BART Station Specific Plan that calls for denser housing development on the underutilized site. It is currently an open plaza across from the two Bay Area Metropolitan Planning Organizations, both the Association of Bay Area Governments and the Metropolitan Transportation Commission. Given the ideal location, advocates and local residents are concerned that development at the Lake Merritt BART Station will have severe ramifications on the current demographic of low- to middle-income residents.

How to get to Chinatown: 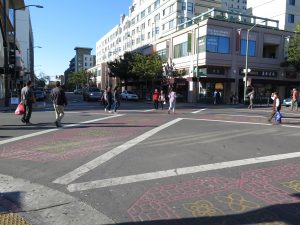 Shopping for groceries along Webster 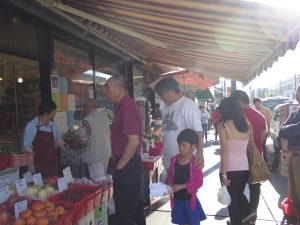 Shopping for groceries along 8th Street 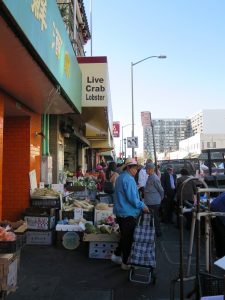 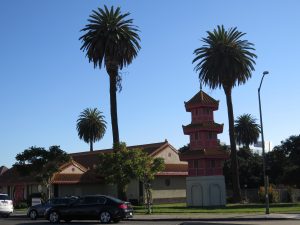 Guide and Photos by Jean Long