Come taste the spice of Oakland

The name Fruitvale comes from the area’s history as home to vast acres of fruit orchards. During the 1960s and 1970s this neighborhood experienced an increase in population, in particular with Latino residents, and became a center for the Chicano Movement that was taking part throughout the Southwest. Since then Fruitvale has become a Latin cultural landmark in the City.

International Boulevard is considered Fruitvale’s “main street”.  Throughout the year one can find various community festivities on this street, ranging from Cinco de Mayo and Easter in the spring, and Mexican Independence Day and Dia de Los Muertos in the fall.

Over the last few decades, the Fruitvale neighborhood has undergone many changes as redevelopment and revitalization efforts have been put in place. As mentioned above, International Boulevard has become the main stage for this neighborhood. Originally E. 14th Street, this arterial underwent rebranding and major street improvements to make it a more pedestrian friendly and welcoming corridor.

Another big change to highlight is Fruitvale Village, one of the first true transit oriented development projects in the Bay Area.  Fruitvale Village was spearheaded by the Unity Council, a local community organization.  The Fruitvale Transit Village houses a bike station, day care center, the Cesar Chavez branch of the Oakland Public Library, ARISE charter school, several retail and service businesses and residential apartments (with a percentage allocated towards affordable housing).  Across the Fruitvale Village is the Fruitvale Public Market, which complements the TOD with additional retail uses and a large public plaza where a weekly farmers market takes place.

How to get to Fruitvale: 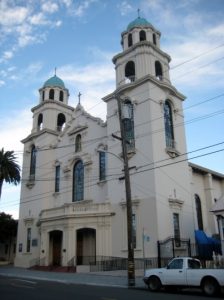 Guide and Photos by Cindy Ma