A recent post in the APA Sustainable Communities Division Newsletter (http://us1.campaign-archive2.com/?u=0a196b8525f96edf44a4b3f53&id=50187e3c1b, e-Bulletin for 05/21/2015) included the following snippets of recent nature-in-the-city resources and events.   The larger movement these snippets represent is that of biophilic city planning and design being pioneered by, among others, the Biophilic Cities Network (launched October 2013, as the culmination of an international research project on the topic by Professor Timothy Beatley, University of Virginia, sponsored by the Summit Foundation; see http://biophiliccities.org). This thread grew out of the research of E.O. Wilson, Stephen Kellert, and a core group of researchers in the 1990s and early 2000s on biophilia and the biophilic hypothesis that spawned the biophilic design initiative in the architectural community in the late 1990s.

Biophilic design and biophilic city planning are in their infancy (the latter more than the former), but represent a powerful integration of research on the relationship of nature to essential components of human development and character with architecture (interior and exterior) and urban planning. Because 90% of an urban person’s time is spent inside, 50% of the world’s population now lives in urban areas (forecast to be 80% by 2050), and human constructed environments, from buildings to cities to regions, are largely destructive of nature and maintain human-nature connections poorly if at all, this research on the biophilic hypothesis has serious implications for design and planning. The potential import of this essential connection challenges designers and planners to “construct” nature in ways that maintain the connection for fundamental human development and community well being; if not simply our survival as a species and a precursor to the civil society required to realize the ideals of democracy and the “holy grail” of the “good society,” and sustainability.

One powerful synthesis of the research and emerging paradigm is Stephan Kellert’s Birthright–People and Nature in the Modern World, Yale University Press, New Haven Conn., 2012. The following are other key resources:

The most recent Global Roundtable conducted by The Nature of Cities (TNOC) engaged 14 photographers in Imaging the urban wild–capturing the vibrancy of  “nature nearby” found in several cities around the world.  Nature provides services from storm water management to habitat to beauty in urban areas, making cities rich in biodiversity, human society, sustainability, resilience, and livability. 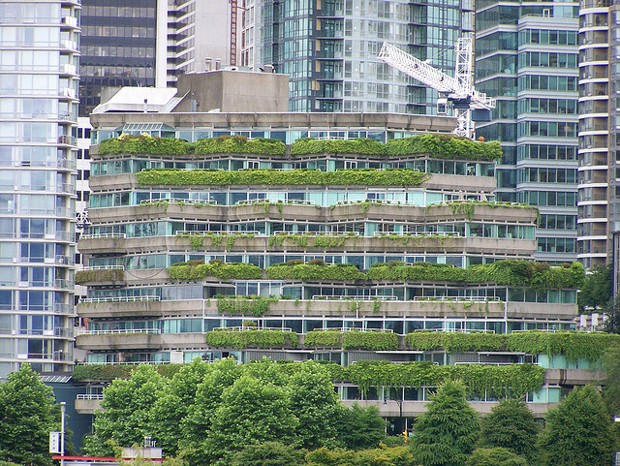 Urban nature also helps the economic bottom line. City Lab reports on How a Quick Glimpse of Nature Can Make You More Productive, referencing results  from an Australia-based research team soon to be  published in the Journal of Environmental Psychology.  These results support other recent findings on the restorative power of nature. Take a peek out the window! Image: Green roof, Vancouver, BC, NNECAPA/Flickr