The Temescal district is located between 40th and 51st Streets, and Highway 24/Martin Luther King Jr Way and Broadway.  Temescal is one of Oakland’s oldest neighborhoods, established in the 1870s and annexed into Oakland in 1897.  Much of the commercial district and the nearby residential neighborhoods date back to the turn of the 20th century.  The development of Highway 24 in the 1950s divided the neighborhood and the area experienced a slow, steady decline.  Its commercial district, located on Telegraph Avenue between 48th Street and 51st Street, became more of a thoroughfare than a destination.

The neighborhood started to turn around about ten years ago.  Local merchants established a business improvement district in 2004 to make the area more attractive to businesses and residents.  Over the past decade, the Temescal district has grown into one of the most popular neighborhoods in the East Bay.  Its attractive and (relatively) affordable housing, vibrant commercial district and San Francisco-convenient location attracted young homebuyers to the area.  It has been named the best old house neighborhood in California (This Old House magazine, 2009), and the best neighborhood in the East Bay (East Bay Express Readers Poll, 2014).  It has even been written up in the New York Times and Wall Street Journal.

The Temescal district is now known as a trendy shopping district with an edgy quality to it.  Probably for these reasons, it is also home to Oakland’s hipster population.  It has a wide variety of restaurants, and is often compared to the Gourmet Ghetto in Berkeley. If you choose to shop, be prepared for a selection of unique businesses offering everything from clothing to vintage furniture, religious icons to games.  Within the past three years, two alleys off of 49th Street (formerly stables for horses) have been redeveloped into a mini shopping district.  If you are looking for something different, the Temescal district is the place for you.

How to get to Temescal: 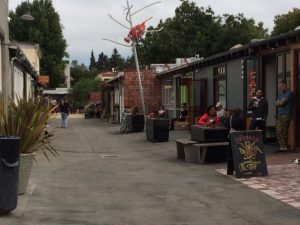 Guide and Photos by Beth Greene