Sourced from various media as noted 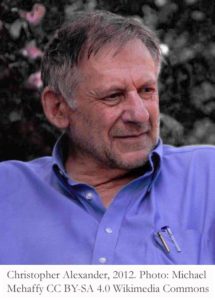 “Christopher Alexander, the Viennese-born professor, architect, and theorist who believed that ordinary people, not just trained architects, should have a hand in designing their houses, neighborhoods, and cities, and proposed a method for doing so in writing that could be poetically erudite, frustratingly abstract, and breathtakingly simple, died [of pneumonia after a long illness] on March 17 at his home in Sussex, England. He was 85.” (Penelope Green, The New York Times)

“His father, Ferdinand Johann Alfred Alexander, was Catholic, and his mother, Lilly Edith Elizabeth (Deutsch) Alexander was Jewish. As a young child, Alexander emigrated in fall 1938 with his parents from Austria to England, when his parents were forced to flee the Nazi regime.” (Wikipedia)

“Chris’s father told him that if he wanted to study architecture, he first needed to study something more intellectually rigorous. So he took [a master’s] in mathematics and [bachelor’s in] architecture at Trinity College, Cambridge, and in 1958 went to Harvard University, where he took the first PhD in architecture awarded there. In 1963 he was appointed to the architecture faculty at the University of California, Berkeley, [a position he held until 1998,] and remained there until returning to Britain early in the new century.” (Howard Davis, The Guardian.)

“[Alexander was] a towering figure in architecture and urbanism — one of the biggest influences on the New Urbanism movement … He was the author or principal author of many books, including A Pattern Language, one of the best-selling architectural books of all time. He is considered to be the father of the pattern language movement in software, which is the idea behind Wikipedia. In 2006, he was one of the first two recipients … of CNU’s Athena Medal, which honors those who laid the groundwork for The New Urbanism movement.” (Robert Steuteville, Public Square)

“Like the urbanists Jane Jacobs and William H. Whyte, Mr. Alexander encouraged city planners to think in human — and humane — terms, giving rise to the New Urbanists, who designed communities based on his principles: walkable neighborhoods, houses with front porches to encourage socializing, and lots of green space.” (Penelope Green, The New York Times)

“Witold Rybczynski, the author, architect, and professor emeritus of urbanism at the University of Pennsylvania, … recalled being struck by Mr. Alexander during their first encounter: ‘I finally met him in 1994, when he won the Seaside Prize’ — an award given by the New Urbanist community in Florida — ‘and he said something I’ve never forgotten: “Everything we see in our surroundings raises our spirits a bit or lowers them a bit.” ’ ” (Penelope Green, The New York Times)

“A 1969 housing project in the barrios of Lima, the capital of Peru, began with his team living for five weeks with different families on-site, observing the details of daily life, to develop what he called a ‘pattern language’ of 67 principles that formed the basis for the design.” (Howard Davis, The Guardian.)

“His approach provided the basis of an architecture bestseller, A Pattern Language (1977). Each of 253 ‘patterns,’ with its own number, describes a helpful relationship between parts of the environment and consists of a title — such as Public Outdoor Room, South Facing Outdoors, or Windows Overlooking Life — explanatory text, diagrams, and photographs. The patterns are linked to each other in a network structure, which gave the book an appeal to the software developers among its general readership.” (Howard Davis, The Guardian.)

“More and larger projects followed — [a community health center in Modesto, California,] a marketplace and a shelter for homeless people in San Jose, California (1990), the West Dean visitors’ center in West Sussex (1994-96), an apartment building in Tokyo (1988), a series of houses in California and Washington state, and many others.” (Howard Davis, The Guardian.)

“To many architects and faculty colleagues at Berkeley, Chris violated the conventional wisdom that beauty is subjective and to talk about it is overly sentimental. Working with him was not always easy, but the fact that everyone’s comments were always taken seriously helped make the effort worthwhile. Chris realized that the smallest hint of unease about an idea might be the sign of something important.” (Howard Davis, The Guardian.)

“The office that he founded in 1967, the Center for Environmental Structure, was always small, with a half dozen or so people. Projects were taken up for the opportunity to experiment and advance the theoretical work rather than to maintain cash flow. Chris saw his most important role as that of a writer, and — in an age of upheaval — his ideas of simple beauty and the need to support the basic humanity of people may become even more influential.” (Howard Davis, The Guardian.)

“Alexander was elected fellow of the American Academy of Arts and Sciences in 1996, is a fellow of the Swedish Royal Society and has been the recipient of innumerable architectural prizes and honors, including the gold medal for research of the American Institute of Architects, awarded in 1970.” (College of Environmental Design, UC Berkeley.)