Located south of Interstate 880 along the Oakland Estuary between Adeline Street and Oak Street, the 225-acre Jack London District historically served as a center of maritime trade and commerce. It is one of Oakland’s oldest districts and also one of its newest and most exciting mixed-use neighborhoods with more than 1,000 housing units, offices, retail, and live-work units in new and converted buildings located primarily east of Broadway around the still active Produce Market.  Much of the housing was built as a result of Governor Jerry Brown’s 10K plan, the effort he launched during his term as mayor to bring 10,000 residents downtown.  Many of the traditional heavy industrial and distribution uses left the District after World War II but they have been replaced by an eclectic mix of light industrial activities, performance spaces, food production, wineries, off-price retail outlets and other uses.

At the heart of the district and the foot of Broadway is Jack London Square, one of Oakland’s most popular tourist attractions. In addition to operating one of the West Coast’s busiest ports, to the west of the Square, the Port of Oakland controls commercial development within the Square except for two sites the City recently approved for residential projects.

How to get to the Jack London District:

Waterfront view of cranes of the Port of Oakland 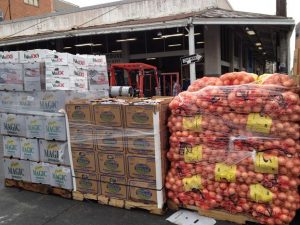 Guide and Photos by Vivian Kahn and Kristin Maravilla