Although Berkeley shares its border with Oakland, its neighbor to the south, its atmosphere is entirely different. Less rough around the edges, Berkeley is more family-oriented and relaxed. Although it is small in size (population 112,580), it is widely known around the entire nation due to both the intellectual prowess of its prestigious namesake learning institution – University of California, Berkeley; as well as due its influential role in the counterculture and anti-war protests of the late 1960s. Similar to Haight Street in San Francisco, Telegraph Avenue was a focal point of the hippie movement and still retains a nostalgic flair that harkens back to those glory days, evident in the selection of merchandise hawked by its shops and sidewalk vendors as well as in the prevalence of countercultural characters that roam its sidewalks. Meanwhile, in the Berkeley Hills where approximately 24% of the population lives, million dollar homes with panoramic views of the San Francisco Bay are nestled between the remnants of a once vast redwood forest whose trees were used as landmarks by sailors navigating through the Golden Gate in the early 1800s.

Interestingly enough, neither the North Berkeley nor the Ashby BART Stations are located in a primary commercial corridor; the North Berkeley BART Station is actually surrounded by R-1 and R-2 (single family residential and restricted two family residential) zoning districts. Visitors who wish to visit Berkeley’s famous Telegraph, Solano, and Elmwood shopping districts or the Gourmet Ghetto must take a bus or walk.

Among similar-sized cities, Berkeley is distinguished by its thriving downtown. The Downtown Area Plan (DAP), adopted in 2012, envisioned a revitalization effort which would allow for three buildings up to 180 feet tall and a multitude of smaller, mixed-use developments. It won the 2014 APA National Planning Achievement Award for a Best Practice. The DAP also authorizes an ambitious Streets and Open Space Improvement Plan (SOSIP), which aims to make Downtown more pedestrian- and bike-friendly, livable, and attractive. Berkeley’s yearly Sunday Streets event, which drew around 50,000 participants in 2014, is modeled after similar events in San Francisco and closes a 17-block stretch of Shattuck Avenue between Rose Street and Haste Street to automobiles, allowing visitors to cycle, walk, and roller skate in the streets without having to avoid vehicular traffic.

Berkeley’s dining scene is eclectic and features a mix of long-standing and newer businesses. The Gourmet Ghetto, located on Shattuck Avenue approximately between Rose Street and Hearst Avenue, is widely acknowledged to be the birthplace of ‘California Cuisine’.

Berkeley is also known for its thriving Arts District, which draws 2.02 million projected annual patrons, features the acclaimed Berkeley Repertory Theatre, and is home to the East Bay’s only arthouse multiplex, the ten-screen Landmark Shattuck Cinemas.

How to get to Berkeley: 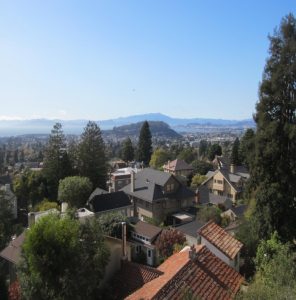 Guide and Photos by Julian Bobilev