Guardian Cities has been exploring the phenomenon of cities built from scratch. Here are excerpts from two recent articles in The Guardian.

“People have been building new cities from scratch for millennia. When countries rise up, when markets emerge, people build new cities. Today, though, we are taking it to unheard-of levels. We have never before built so many new cities in so many places at such great expense as we are right now.

“We are standing on the precipice of a new city building boom unlike anything we’ve seen before. These shiny new metropolises hold the dreams and aspirations of people and nations from east Asia to the Middle East to Africa. Will they deliver a bright new urban future or a debt-fueled bubble of historic proportions?

“The new city has been sold as a one-stop cure-all for an array of urban and economic issues facing emerging markets around the world — overcrowding, pollution, traffic congestion, housing shortages, lack of green space, and economic stagnation. By starting from scratch, governments hope to move on from their current clogged and dysfunctional urban centers and develop new economic sectors. City building itself can also be a highly profitable endeavor.

“ ‘The major reason for new cities is that there is so much migration,’ says John Macomber, a senior lecturer at Harvard Business School who has studied new city development in depth. ‘People are moving to cities all over the world to seek opportunity.’

“ ‘The sad thing is that we’re going to develop more urban area in the next 100 years than currently exists on Earth,’ says the Nobel prize-winning economist Paul Romer of New York University. ‘If we stick to business as usual most of it is going to be disorderly and less functional than the stuff we already have. … They’re also an inappropriate response to the real need, which is not for the rich to have a place to retreat to but for people who want to get a first position on the kind of urban, modern escalator that can help lift them and their kids to a better life.’

“ ‘We’re in the midst of new cities fever,’ says Prof Sarah Moser. The head of the new cities lab at McGill University has documented more than 100 cities that have sprung up across Asia and Africa since the early 2000s for her forthcoming Atlas of New Cities.

“There’s Eko Atlantic, a ‘new Dubai’ taking shape on reclaimed land off the coast of Nigeria, and Forest City, a ‘new Singapore’ being built just over the Johor Strait from the original. There’s the New Silk Road city of Khorgos rising from the barren steppe that separates Kazakhstan and China, the ‘sustainable city’ of Neom in Saudi Arabia, the Norman Foster-designed Masdar in Abu Dhabi, a few in Latin America … and even a Robotic New City in Malaysia. 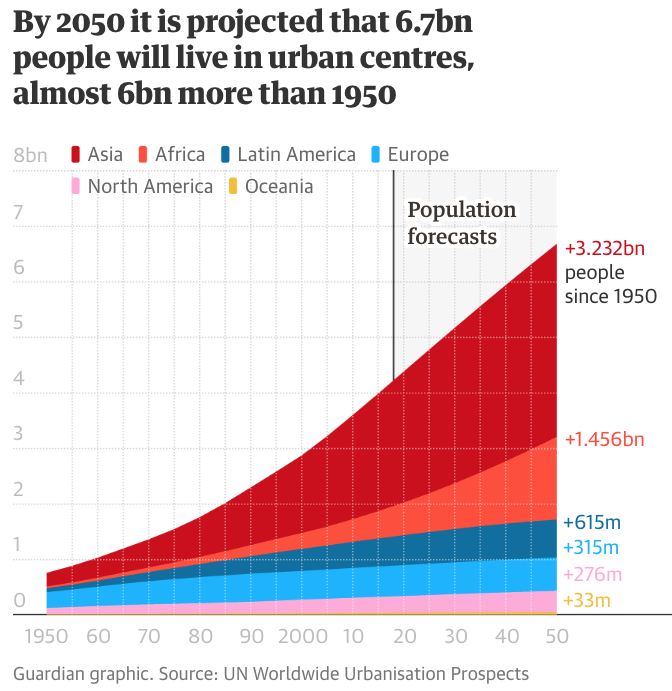 “Most are in places where rapid urbanization and population growth have overwhelmed existing cities. Sometimes master-planned cities are a way for countries in the global south to kick-start an economic transition out of agriculture or from resource-based economies. They can also allow governments to write their country’s image afresh.

“ ‘The computer-generated models look beautiful – all the old city problems are gone and it looks magically real. It’s compelling for people who live in overcrowded and polluted places,’ says Moser. ‘And the money to be made is staggering – in the trillions of dollars.’ ”

Read the full article and see the time-lapse images here.