“Around 275,000 Black Californians have left high-cost coastal cities in the last three decades, sometimes bound for other states or cities, but more often to the state’s sprawling suburban backyard. Many pack up for the promise of homeownership, safety, and better schools.

“Housing-rich Elk Grove has gained nearly 18,000 Black residents since 1990 — a 5,100 percent jump mirrored by increases around the Delta, Inland Empire, and Central Valley. 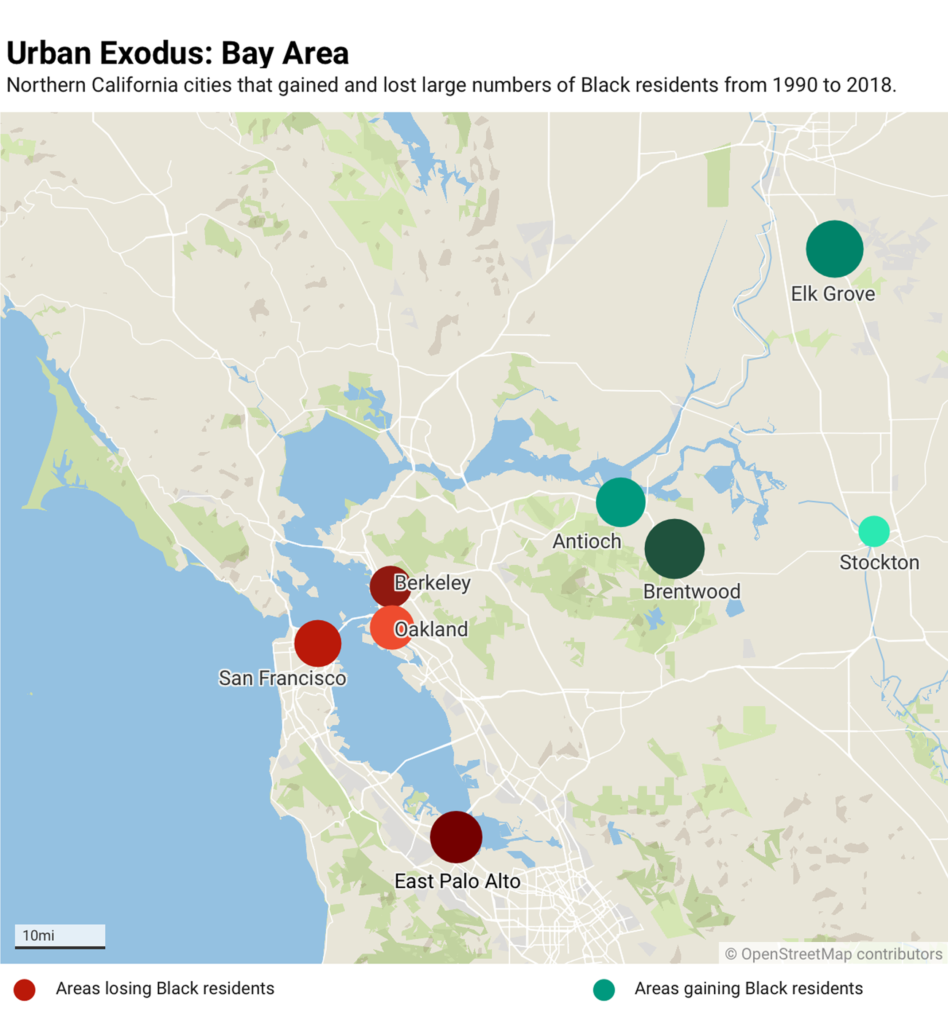 At the same time, Black renters have been disproportionately forced out of cities as costs and evictions climbed — the Black population has plunged 45 percent in Compton, 43 percent in San Francisco, and 40 percent in Oakland. While a version of this geographic scramble is playing out for working and middle-class people of all races, the distinct obstacles that Black residents encounter in new communities raise the question: How far do you have to go today to find opportunity?

“As Black Lives Matter protests collide with COVID-19’s disproportionate Black death toll and anxiety about a coming wave of evictions, will these overlapping crises accelerate California’s Black exodus or force a reckoning inside and outside major cities?

“In 2000, California had the country’s second-largest Black population — more than 2.2 million people — [while] a seismic shift was happening in where people lived, the opportunities they chased, and the social networks they relied on.

“The state went from 7.7 percent Black in 1980 to 5.5 percent Black in 2018, even as it added 15 million residents who were mostly Latino, Asian, or multi-racial. Nearly 75,000 Black Californians left the state in 2018 compared to 48,000 Blacks who moved in. The three most popular states for Black ex-Californians were Nevada, Texas, and Georgia, reflecting both a national reversal of last century’s Great Migration and a move to emerging middle class hubs for Black homeownership, education, and entrepreneurship.

“Deirdre Pfeiffer, an associate professor of geography and urban planning at Arizona State University, found that some L.A. transplants to the Inland Empire did find upward mobility in the 80s and 90s. But that’s been difficult to maintain because of both a slow-down in building, and patterns like a racial ‘tipping point’ in suburban real estate, where white residents tend to flee as areas diversify. From there, in some cases, property values sink, tax rolls shrivel, and public services like schools start to decline.”

The pandemic has pushed aside city planning rules, but to whose benefit?

Bay Area of 2050 will be more crowded — planners want to make it more equitable, too