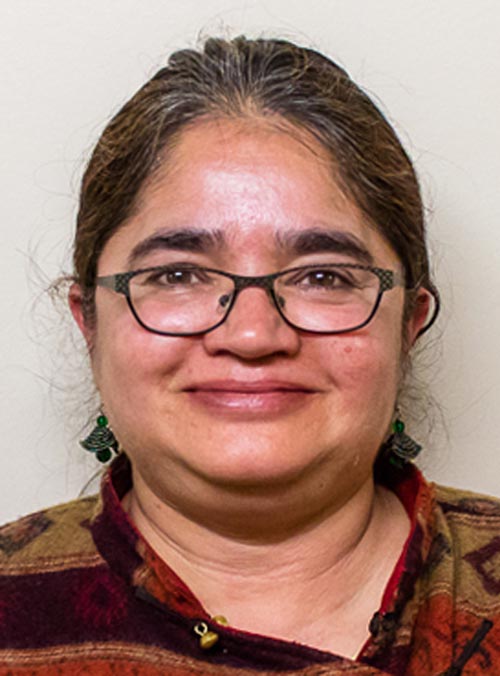 Miroo Desai, AICP, senior planner at the City of Emeryville, is Northern Section’s mid-career planners’ group director. In 2019, she received a Northern Section Award recognizing her as an outstanding mid-career planner. Desai was elected Vice President for Diversity and Equity for APA California for 2020-21 and serves on the Chapter’s Executive Board. In 2020, she received APA California’s Distinguished Contribution Award. She holds a master’s degree in international relations from Jawaharlal Nehru University, a master’s in urban planning from the University of Hawaii at Manoa, and a bachelor’s degree in economics from Delhi University.

When did you begin your volunteer work for APA?

In 2009, I started volunteering for the Northern Section Board as a Planning Diversity co-director. Among all the diversity initiatives, my favorite was speaking to middle- and high-school students with co-director Cindy Ma, AICP. Together, we introduced students to planning as a career and advised young people how to be more civic-minded.

When did you begin at the state level?

In 2012, the APA California Board nominated me to represent Northern California as a Membership Inclusion Coordinator (Northern). One of the major tasks of this position was to organize the Diversity Summit hosted at the state conference each year. Previously, there was no funding for nominated members to attend the Board’s annual January retreat. One year, I decided to attend and just pay my own way. The California Board talked about the strategic plan for the year, with goals such as advancing diversity and inclusion. I advised that nominated members whose portfolio is “coordinating inclusion” activities should be sponsored to participate in the APA California Board’s strategic planning and have a vote in key decisions. This feedback resulted in a new elected and funded position, Vice President for Diversity and Equity, in 2018. I appreciate that APA California’s Past Presidents Julia Lave Johnston and Pete Parkinson, AICP, supported this change.

The focus on diversity is trending nationally. Your thoughts?

California has been slightly ahead of the diversity discussion. I am part of an APA National Task Force whose mission is to survey and share the chapters’ best diversity practices.

On what are you working for Northern Section?

Some mid-career planners find it hard to get involved with APA. Some are at the point where they are raising children, so it can be challenging to participate in events or volunteer. I would like to see more mid-career folks represented. These planners bring a lot of experience and perspective to the community and our profession. We want to increase their influence. Mid-career planners, please contact me with your ideas!

On what have you focused in Emeryville?

When I joined the City in 2004, I worked on a General Plan oriented toward high and medium density and mixed-use development. The stage was set in the late eighties and early nineties when a progressive city council changed the land use dynamic by seeking federal funding for brownfields to allow redevelopment on formerly industrial, contaminated sites. That contributed to Emeryville’s success story.

How was Emeryville different from your previous roles?

After being in large organizations (Oakland and San Mateo County), Emeryville was a change. It’s a small but progressive city. The first thing I noticed was that it did not have any single-family zoning districts. The General Plan established an area of stability, including duplexes, fourplexes, remaining warehouses, etc., with a focus on high density outside of that area. The trend for office space is toward the Life Sciences, which continue to have a big presence in the city.

What are Emeryville’s biggest challenges?

Housing affordability remains a problem. In Emeryville, redevelopment has primarily occurred on industrial sites with limited displacement. However, the housing developments I have worked on and approved are not places where I could afford to buy or rent.

How do you view state legislation for housing affordability?

State legislation is a result of cities encouraging job creation but not the needed housing to accommodate growth. Planners can customize the housing types that work for their communities — they do not have to be high-rises. There are plenty of two- and three-story buildings that are multifamily. State legislation that helps non-profit housing developers with funding is also needed.

What is the planner’s role in the housing affordability crisis?

Planners must re-examine their practices regarding housing affordability. They should facilitate housing approvals and not create obstacles. When we update our General Plans and promote “neighborhood compatibility,” we are advising decision-makers to keep things as they are. Is that the way to go?

We should advise our consultants that their job is to give progressive ideas and steer away from what has not worked. As an example, Berkeley has three BART stations, yet you come out of the Ashby station to a sea of single-family homes. In 2021, Berkeley is finally talking about densifying around BART stations, which is not a new concept to any planner.

What advice do you have for the many planners who work in politically difficult environments?

We get caught up with people’s complaints. A big portion of our work is educating our citizens and elected officials about what benefits them as a community and showing them how we can solve a problem.

You cannot talk with people who are not planners about some of the challenges you face. Talk to another planner outside your city, whether it is about a bad boss or a bad politician. When you connect with other planners, you realize your problem may not be unique and others may have found a solution.