The California cap-and-trade program is building up cash while lowering carbon emissions. Next City looks at one way the money is being put to use [in East Oakland]. 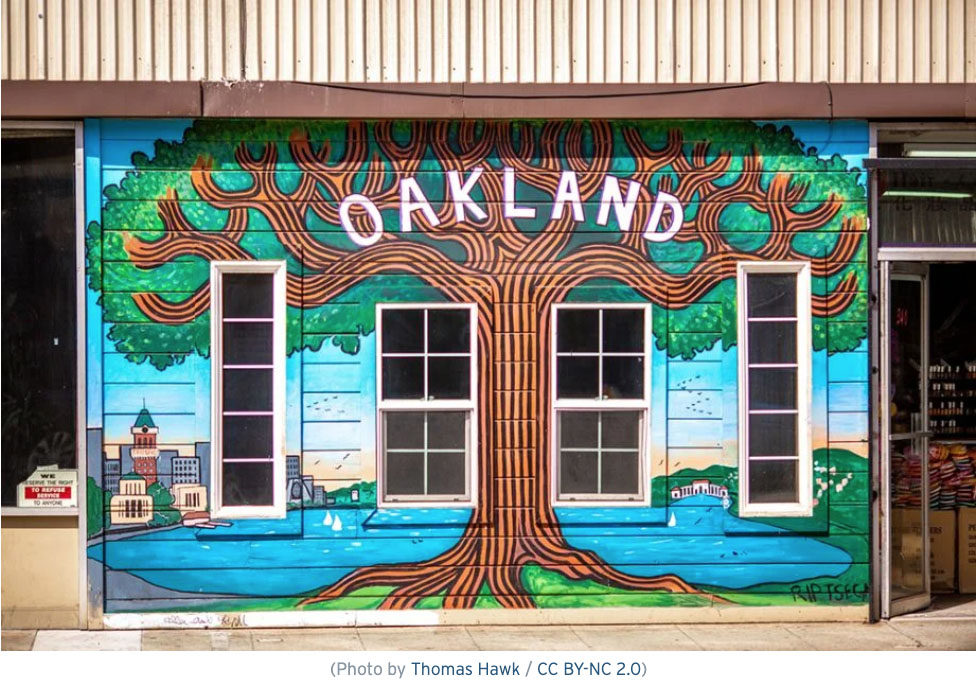 California’s cap-and-trade program collected more than $2 billion from polluters in 2021 alone, and cities are using that money for a range of programs, including one in Oakland that sends counselors to help people stay in their homes.

[Essentially, cap-and-trade is a tax on carbon emissions. Thirty-five percent of cap-and-trade money must go to disadvantaged communities through a competitive grant process. “Disadvantaged” refers to those disproportionately affected by air pollution. The money can be used for amenities, some of which might cause “climate gentrification.”]

The Oakland initiative — Better Neighborhoods, Same Neighbors — targets a five-square mile neighborhood for $28 million in improvements, including a 1.2-mile-long community trail, expanded bike-share, 2,000 trees, and the creation of one of the largest urban aquaponics farms in the country.

In this [32 min.] podcast, Next City Executive Director Lucas Grindley talks with Housing Correspondent Roshan Abraham about his story on the team of housing counselors dispatched to ensure that those improvements don’t lead to the displacement of East Oakland residents.”

[$846,000 of the $28 million will go to the team, which has a goal of contacting 14,000 people by the end of the Better Neighborhoods four-year grant cycle. The team wants to empower East Oakland residents by making them aware of resources available, and showing them how to navigate the system. The counselors support tenants who receive eviction notices and help them respond to summonses (140 currently need such support). The team also conducts tenants rights workshops and offers legal cafes and housing cafes.]

[In the podcast, we] meet one of the counselors, Bee Coleman with East Bay Permanent Real Estate Cooperative [EBPREC]. One resident told Coleman that she felt the housing counselors had answered her prayers and ‘you were sent by God.’

“That was her takeaway after having been alone, literally, in the fight for years, and feeling like she did not have support,” said Coleman.

You can listen to this half-hour episode on Apple or Spotify, or via megaphone here.

Republished with permission. Bracketed paragraphs are paraphrased from the podcast.

Read in greater detail in Next City an earlier 4 min. piece by Roshan Abraham, “How Oakland anti-displacement advocates use carbon emissions cash.” bit.ly/OakCapTr

The Chronicle covers how an East Oakland grass-roots effort is using money from the same $28 million to help residents tackle climate problems. Planting Justice, along with Oakland’s Parks and Recreation Foundation, is currently working to plant 1,000 fruit trees at residences. The effort is part of the Community Greening project, which aims to plant a total 2,000 trees in the next two years. https://bit.ly/37w2HGa.