“A lawsuit filed against the city of Los Altos alleges that city staff — and later the City Council — illegally blocked a housing project that complied with California’s new by-right housing law.

“The civil suit, filed on June 12 by the California Renters Legal Advocacy and Education Fund (CaRLA), contends that a proposed development in downtown Los Altos qualified for streamlined approval for housing projects under Senate Bill 35, legislation passed in 2017 to boost housing growth across the state. The project proposed building a mixed-use building at 40 Main St. with 15 housing units, but was shot down in April after the City Council concluded it didn’t meet the criteria to skip the normal planning process.

“CaRLA [alleges] city leaders violated SB 35 by failing to cite an ‘objective’ rationale for blocking a project they didn’t like. The suit seeks to void Los Altos’ denial of the project and compel the city to approve the application.

“This is one of the first lawsuits in California challenging denial of a project based on SB 35, the group’s lawyers say, giving it the potential for a precedent-setting judgment.

“The project has a history spanning 12 years, with the owners having been denied by the city multiple times. [A big] change came last November, when the all-office project was scrapped in favor of a mixed-use development with 15 apartments, seeking to capitalize on streamlined approval of housing projects that provide enough affordable units, with two-thirds of the development for residential uses. 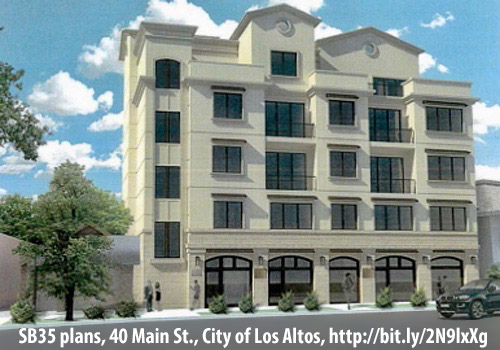 “City planning staff in December swiftly rejected the idea that the proposal was subject to SB 35, arguing the application was incomplete; the project did not meet parking standards for the area; fell short of required two-thirds residential uses; and at five stories, was far too tall and dense to meet zoning standards for downtown Los Altos. At an appeal hearing on April 9, the City Council denied streamlined approval of the project.

“CaRLA attorneys believe Los Altos failed, within a 60-day window set forth under SB 35, to cite objective standards that the project proposal violated, and dug up a handful of new standards with which the project allegedly conflicted.

“Sonja Trauss, a plaintiff in the case and co-executive director of CaRLA, said the proposed project in Los Altos should be seen as an example of SB 35 working — getting the owners to convert an all-office project into a primarily residential development in the midst of a regional housing crisis.

“Trauss believes the case could be an opportunity to get a judge to say the 60-day timeline under SB 35 must be enforced. It would also signal to cities that the bevy of new state [housing] laws [will be] harder to ignore.”

Read the full article here. Also in this issue, from Next City, “What is CaRLA, and why is it suing California cities?”