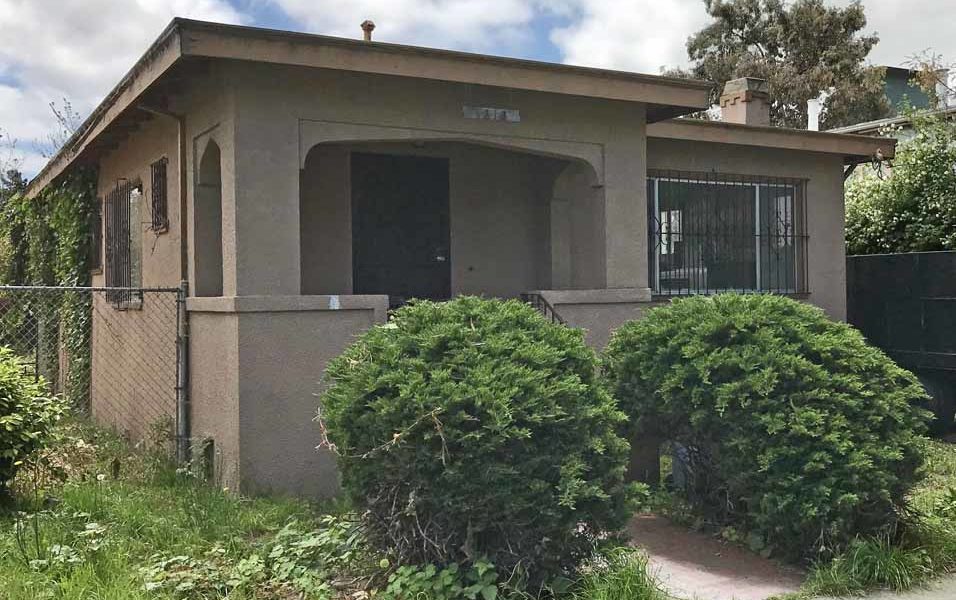 ICYMI: This Fact Sheet can aid localities in implementing SB 9

“The California Department of Housing and Community Development released an SB 9 Fact Sheet as a resource to local agencies, homeowners, and other stakeholders. The fact sheet provides a high-level overview of key parts of the law and addresses common questions received by HCD from local agency staff and members of the public over recent months.

“HCD does not have authority to enforce SB 9, but violations of SB 9 may violate other statutes over which HCD does have enforcement authority, including:

“As local jurisdictions implement SB 9, including adopting local ordinances, it is important to keep these and other housing laws in mind. As of [March 25], the Housing Accountability Unit (HAU) has received 29 complaints about local SB 9 implementation ordinances that it is currently investigating for potential violations of state law. The HAU is coordinating with the California Office of the Attorney General on SB 9-related complaints.

“ …[The] HAU holds jurisdictions accountable for their housing element commitments and other state housing laws.” 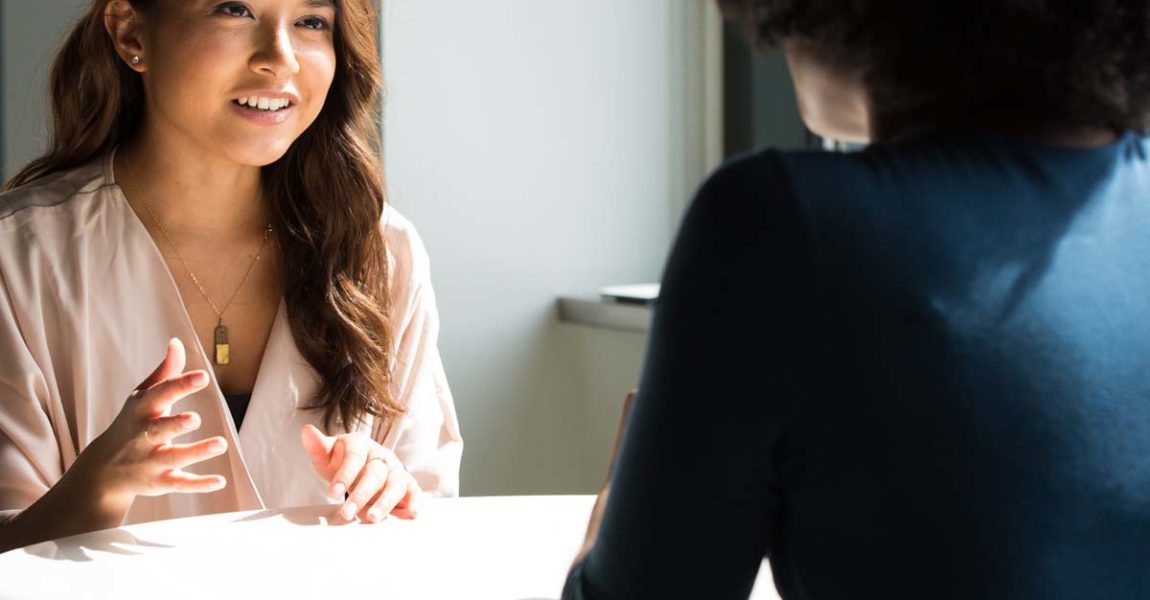 In search of an interviewer

Northern News is looking for a volunteer with strong writing skills to partner with Catarina Kidd, AICP, as guest writer for the widely-read “Meet a local planner” column. You will identify interview subjects, conduct interviews, and write several of the columns featuring accomplished planners throughout our northern California membership. It’s a fun way to meet other planners.

To apply, send your résumé and a writing sample to news@norcalapa.org with the subject line “MALP guest writer.”

Some of the free SPUR events through June

Is your night experience in cities poetic or fearful? Though architects and planners design the world around us primarily for the daytime hours, half of our lives are spent in the dark. Some individuals, such as culture lovers and clubbers, choose to go out at night, while others, like shift workers, must do so as part of their jobs. And let’s not forget the wintertime, when most of us experience cities after the sun sets early. However, regardless of the reasons that we traverse cities at night, well-designed illumination is vital to accessing our cities during these darkened hours. It connects us to fresh air and social interactions, while boosting local economies and augmenting safety and a sense of welcome. Join noted lighting urbanist Leni Schwendinger as she leads a panel of international lighting and urban design leaders to explore the perceptions, realities and creative possibilities of the city at night.

Budgeting for Climate Resilience in California

The California State Senate has proposed spending $18 billion on climate change resilience this year, outstripping the Governor’s office in the scope and scale of their ambitions. Bay Area Senator Robert Wieckowski, representing the 10th Senate District of southern Alameda and northern Santa Clara counties, has championed these efforts from his position as the chair of the budget subcommittee on Resources, Environmental Protection, and Energy. Come hear Senator Wieckowski as he discusses the Senate’s bold climate vision and how he and his colleagues are working to turn it into reality.

Comprehending the Contested Complexity of CEQA

CEQA, adopted in 1970, is the state’s key environmental protection statute. It requires state and local agencies to analyze proposed construction projects, publicly report potential environmental impacts and undertake all feasible measures to avoid or mitigate those impacts. Though the law established California as a world leader in environmental protection, many have argued that its abuse is an impediment to environmentally-friendly projects and directly responsible for the state’s housing crisis, as CEQA-related processes serve to delay, downsize, or even block new development, transportation, and infrastructure projects. The reality is as complex as the law itself. While some groups view CEQA as an outdated and counterproductive law in dire need of drastic reform, others see it as a critical shield for protecting the vulnerable, from California’s wildlands to its underrepresented communities. Take part in a discussion CEQA’s goals, successes, and failures, and what it might take to reform the embattled law while maintaining or even strengthening environmental protection.

Over the last five years, Housing the Bay has examined the drivers of our housing crisis, highlighted public and private sector solutions, and elevated the voices of a broad range of people from across our industry and North America. This year, ULI will continue to bring you the most compelling ideas and innovations for generating more housing and increasing affordability, with a clear-eyed focus on how we can go big. Join ULI and partners on June 9, 2022, for a full day of inspiring speakers, invigorating discussions, game-changing ideas, and tangible actions we can get to work on right away. Bring your mind, your energy, and your commitment to building the Bay Area we need and deserve to what is certain to be the Bay Area housing event of the year. Presented by ULI San Francisco.

A Home Run For Homes

In 2016, the City of San Diego implemented the Affordable Homes Bonus Program (AHBP), which allows developers to build additional housing if they also dedicate a portion of the new development to be affordable. The program, which builds on top of California’s existing Density Bonus Law, has enabled a substantial increase in the production of market-rate and deed-restricted affordable homes in San Diego. The newly released report, Home Run for Homes: Celebrating Success of San Diego’s Affordable Homes Bonus Program, dives into how the AHBP is able to succeed in the face of skyrocketing housing costs. Come hear from the program’s architects, in conversation with experts from the Terner Center for Housing Innovation, about how the AHBP could be more widely implemented to tackle California’s ongoing housing crisis.

Bringing the Trains to the Transit Center

Opened in 2018, and stretching across four blocks in downtown San Francisco, Salesforce Transit Center is the Bay Area’s largest regional transportation hub. Though the facility serves seven different transit operators whose networks extend as far as Hercules, Palo Alto, and Santa Rosa, buses are the only public transit mode currently available. That will all change, however, when the transit center’s train platforms open later this decade as part of the Downtown Rail Extension: an ambitious, six-track infrastructural expansion that will facilitate access to Caltrain and, eventually, California High-Speed Rail. Join SPUR and the Transbay Joint Powers Authority for a behind-the-scenes tour of Salesforce Transit Center. We’ll take a look at the center’s current operations before descending underground to explore the train box, a key component that, when finished, will make the facility the true Grand Central Station of the West. In partnership with the Transbay Joint Powers Authority.

As home prices soar throughout the state, one of the most prominent groups impacted are educators. Teachers and staff working in public school systems across California are struggling to find affordable housing in and around the communities in which they work. That scarcity forces long commutes or, in some cases, the decision to cohabitate with colleagues in order to stay within close proximity to the school where they’re employed. And as housing affordability challenges create acute staffing challenges, more school districts are considering building workforce housing on land they own. Join us for a comprehensive overview of the potential for school district land across the state to be designed and developed for affordable housing for the education workforce, and hear from a developer about what it takes to get this done. Co-presented by the Chan Zuckerberg Initiative.

Innovative Solutions in the Face of California’s Growing Housing Crisis

The cost of housing across the San Francisco Bay Area has grown exponentially over the last decade, leading to many homes becoming unaffordable for many families. As policymakers and experts look at different ways to address this ever-growing dilemma, companies like Nabr and Abodu are developing © solutions to providing affordable homeownership opportunities for Bay Area residents looking to purchase a home. Join us for a conversation with both companies to learn about the plans and products that each is implementing in an attempt to relieve the Bay Area’s worsening housing crisis.

Housing prices in communities across the country are on the rise, reducing the number of affordable homes available for middle- and low-income families. Legislators and policy experts throughout the United States have been tirelessly working to alleviate the widening housing crisis through the implementation of new zoning policies, the construction of accessory dwelling units (ADUs) and by investing in the development of our cities’ urban cores. However, as described in her new book, Fixer Upper: How to Repair America’s Broken Housing Systems, Brookings’ Senior Fellow Jenny Schuetz argues that most discussions about how to address the housing crisis miss a key notion: that the nation’s housing systems have been constructed to be fundamentally unequal in nature. Join us to explore the arguments posed in her book and learn what it will take to create more affordable, and more widely available, housing stock across the country.

A New Social Contract for Housing in California

California’s housing crisis is now decades old, but its not for lack of good ideas, good planners, or serious resources. How do we build the type of grand bargains and big coalitions needed to make change? How do we even build the political will to change our housing system? A recent book by author Alex Schafran, Where We Go From Here, explores how new approaches to the real estate economy, to homeownership and resident control, and to questions of race and geography can help us design a better housing policy in the Golden State. Join us for a provocative exploration of what a new social contract for housing in California could look like. 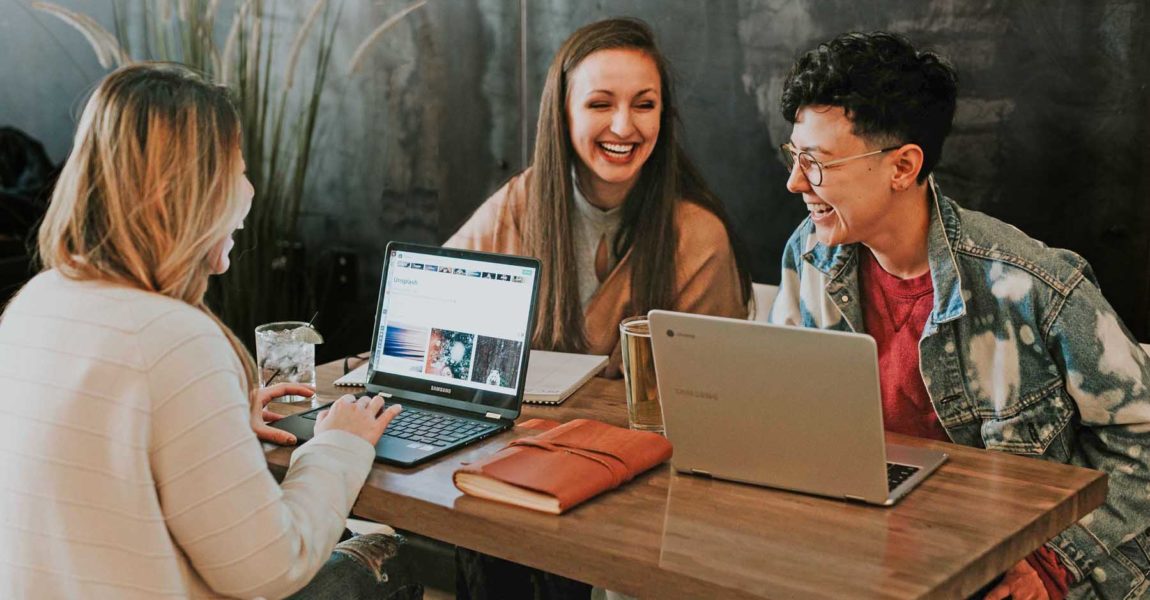 Most workers who quit in 2021 felt disrespected; cite low pay, no opportunities to advance

“A new Pew Research Center survey finds that low pay, a lack of opportunities for advancement, and feeling disrespected at work are the top reasons why Americans quit their jobs last year. The survey also finds that those who quit and are now employed elsewhere are more likely than not to say their current job has better pay, more opportunities for advancement, and more work-life balance and flexibility.

“For the most part, men and women offer similar reasons for having quit a job in the past year. But there are significant differences by educational attainment.

“College graduates are more likely than those with less education to say that compared with their last job, they are now earning more (66 percent vs. 51 percent) and have more opportunities for advancement (63 percent vs. 49 percent). In turn, those with less education are more likely than college graduates to say they are earning less in their current job (27 percent vs. 16 percent) and that they have fewer opportunities for advancement (18 percent vs. 9 percent).” 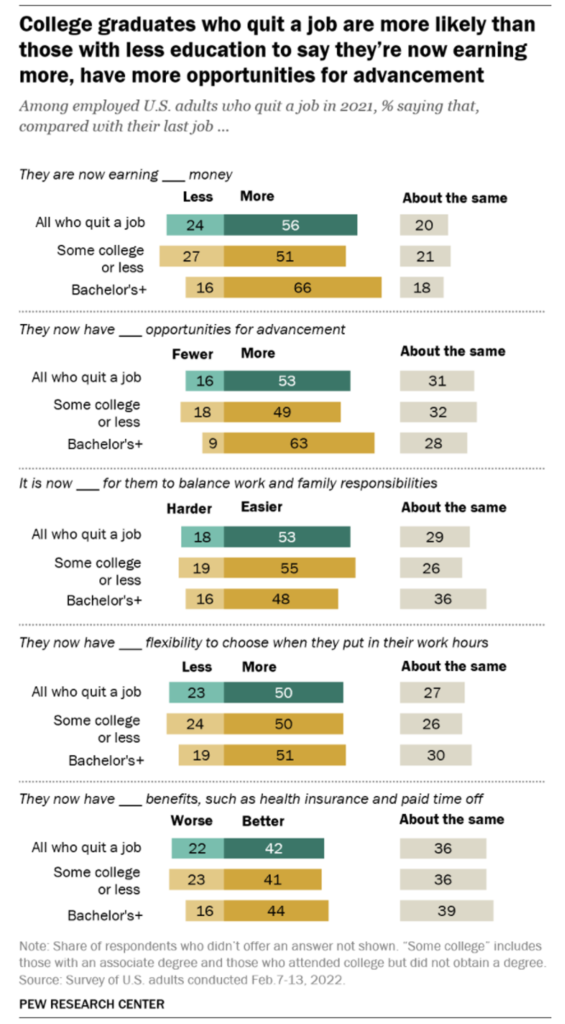 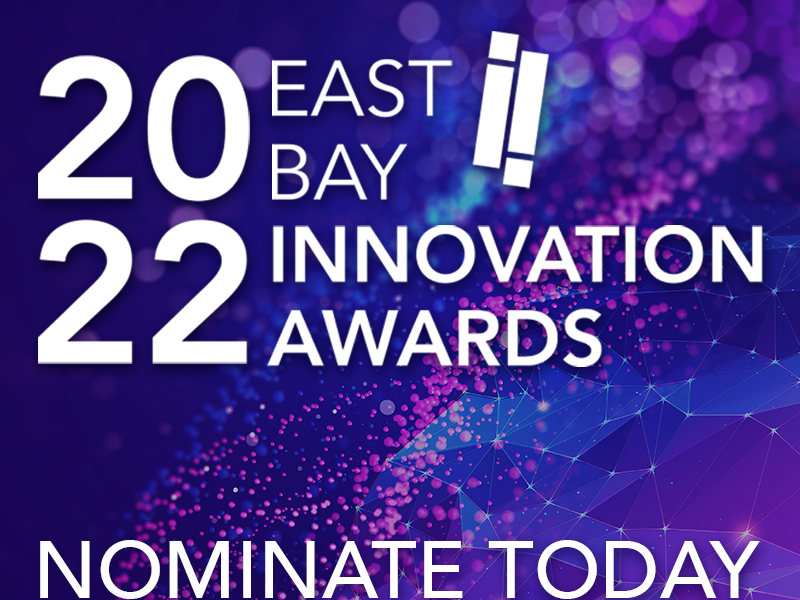 The 10th annual East Bay Innovation Awards returns in person to the historic Fox Theater in Oakland on the evening of Thursday, August 4, 2022! The nomination period for the 2022 awards ceremony is now open through Friday, March 25 at 5:00 PM. Make sure to submit your nominations asap!

Visit eastbayeda.org for program information, key dates, and FAQs, and mark your calendars for lead up events, including the Innovation Awards Block Party, where the 2022 finalists will be announced at the Bridge Yard in Oakland.

The East Bay is a world-class leader when it comes to innovation and entrepreneurship. Often referred to as the “Academy Awards of the East Bay,” the East Bay Innovation Awards is the premier program of its kind that celebrates and honors extraordinary companies and organizations that contribute to the region’s legacy of innovation. Nominations are accepted for any entity or individual with headquarters or operations in the Alameda or Contra Costa Counties.

The categories (listed here) include Built Environment (Companies utilizing exceptional and innovative approaches, technologies, and strategies to shape the built environment, including but not limited to architecture, planning, civil engineering, development, and construction companies) and Community Impact (Individuals or organizations advancing creative and equitable solutions to tackle social, environmental, and/or economic challenges and disparities.) 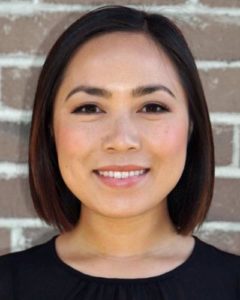